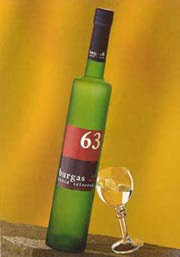 Burgas 63 Rakia is probably the most famous Bulgarian Rakia of all. Many Bulgarians confess that this is the best Rakia you can get that is mass produced in factories. Many visitors to Bulgaria often get told to try this particular brand to give them good first impressions.

Produced by the big and famous Vimprom company, there are three types of Burgas 63. 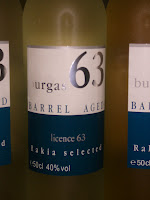 The first is the standard Burgas 63 700 ml that has the gold mark in factory produced Rakia over the years. Much is exported to expatriate Bulgarians abroad.

The Second is called 'Licence 63 Barrell' which is a special selected Rakia that has been stored in barrels. This bring out more matured flavour to the Rakia This particular version of Burgas 63 was introduced to the market since the beginning of 2001. - I notice that the spelling of Burgas on this brand is spelt Bourgas on the older labels.

There is a third version of Burgas 63 Rakia, which I have seen, but can't find any information about it at the moment. There will be an update of this blog directly it is found. 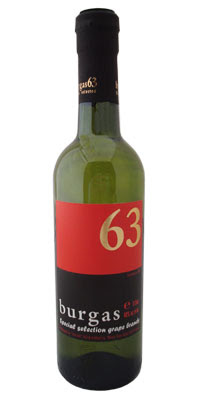 The price of this 70o ml. bottle varies from around 12 leva in Bulgarian based supermarkets to around $15 (21 leva) for a 375 ml (half bottle) though mail order.

My personal impression of the Rakia is of a smooth and rich tasting Rakia that I enjoyed, but not to the extent of the prices that are being charged. A Rakia certainly for a special ocassion and as mentioned before, a good introduction for first timers sipping Rakia.

Burgas 63 is referred to in a article called "Why I like Uncool Bulgaria", by Alan Bell:

We try something called Rakia Burgas 63. Rakia is the Bulgarian firewater – and this is the “gold standard... the ultimate rakia experience!”

It’s like grappa, with a kick that just makes me think: “Very bad hangover.” We go to see “bottling facility number 10”. We try some brandy. “Concentrated sunshine!” exclaims Panayot. “You are going to be perfumed for the whole evening, be sure of that!"

It would be good if we could get some feedback from peopel who have tried Burgas 63 to find out whether they agree this is the best factory produced Rakia in Bulgaria. Comments are always welcome anyway!
Feel free....

Free web directory
Travel Reviews - Historic Sites - Classic Foods - Wine & Wineries
Reviews of popular foods by region, fine wines and wineries. First hand travel reviews including history, attractions, tips, photos and books.
The Drinking Place - Whether you're throwing a party or just relaxing with a friend, you will find great drink recipes here to quench your thirst.
Hotels in India
Provides customers the ease and convenience to book hotels to any dream destination in India.
Blogs Directory
Lovers Of Wine
Our wine guide website is for all “lovers of wine. ” information and resources on wine tasting, wine tours, types of wine and more.